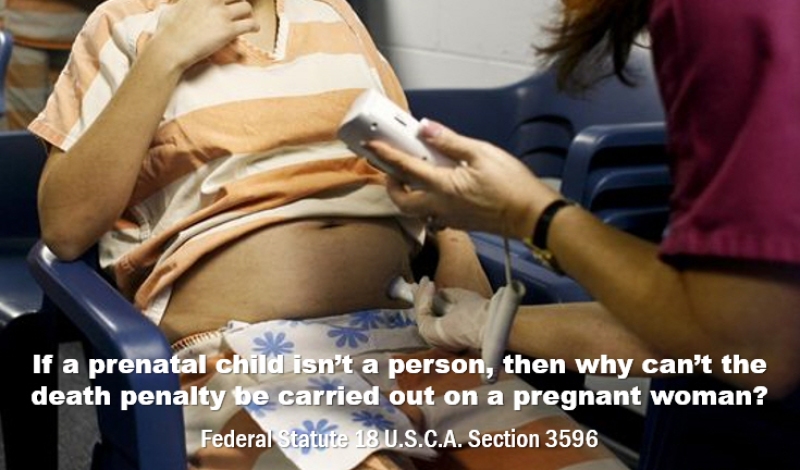 Because it’s inducing a form of abortion, the fetus will die and if the mother is willing to carry on with the pregnancy, you can’t force her not to?

You’re acting like abortion is forced when it’s literally a choice. You can choose to have an abortion, you can’t choose for someone else.

I don’t think that is the point though. The woman has the death penalty. Who cares if she is choosing to keep her pregnancy. Whatever she did to get the death penalty, means she has to pay for her crimes. The fetus isn’t worthy of life, so kill it along with her.

No, you don’t get it. It’s her pregnancy, you have no right to delve into it and decide what she does with it. If she wants to give birth to it, sure, but you can’t kill her until she gives birth, it’d terminate the pregnancy. But if she wants to have an abortion and she’s got a death sentence, sure go ahead? Although I don’t know what complications would ensue if you had a baby inside you while you get killed via chemicals or other methods.

So let me get this straight, a woman gets the death penalty, basically losing all rights. But since she is pregnant she gets to dictate when she dies? You are going to allow her to give birth, and then that baby gets to know it’s mother was killed after giving birth? Yeah that’s not emotionally scarring or anything! @@ It’s okay to kill a fetus but only if it’s unwanted. Do you people not get how insane that is!? It is a LIFE, you CANNOT put a value on it!!

Because as a pregnant woman she is the only one who gets to decide what happens with her pregnancy, it’s happening inside of her. She doesn’t dictate when she dies, she dictates how long she has until she is going to die. It’s a delayed death but you cannot force someone to give up a pregnancy even if the mother is a criminal. You can’t force this onto someone, the pregnancy happens inside their body, it’s their decision on the matter. “That’s not scarring or anything” you know what’s also “not scarring”, kids who were put up for adoption. Don’t you think they’re scarred and loath themselves even a tiny bit, sure loving families take them in but really for cases where the parents abandon the kid, the child feels unwanted to begin with.

LMAO! I find it amazing that someone can defend LIFE so wholeheartedly and then turn around and say it’s okay to murder that same life. And why? All because the woman doesn’t want it. It’s either a life worth saving or it’s not. If she can choose to kill the unborn, then the state has every right to kill her, pregnant or not!

Our laws and our morality are a twisted ambiguous hypocrisy riddled disaster. Every person lucky enough to have actually been born since the 1973 Roe v. Wade and Doe v. Bolton decisions have had to contend with the swirling contradictions of who, when and why we should be allowed to kill with regards to our prenatal children.

Keep in mind that a woman on death row is a ward of the state and by default, so is her prenatal child. Her child committed no crime and is therefore innocent and cannot be killed, regardless of their mother’s wishes. The state is, in effect, carrying that child. The state has already decided, under law, that they will not kill the child. This is an example where bodily autonomy has already been decided under the law — the mother and child each have rights to their own bodies. The mother, in this case, relinquished her rights by taking the right to life away from another. The child, regardless of their mother’s crime, retains their right to life.

The three questions of who, when, and why to kill as applied to prenatal children should never have to be considered. We must all realize that killing innocent living human beings is wrong and never fails to lead to greater human tragedy. So many are so ignorant of history that we are almost certainly destined to repeat it. And the atrocities awaiting us will have been built upon the foundation of abortion driven by the idea that some lives matter less than others. That the unwanted and the mentally or physically disabled can be destroyed without question and without the concern of the state while awaiting birth.

How much longer until being born isn’t enough?

Share via
Pregnant Behind Bars
https://cultureshiftforlife.com/2013/08/29/pregnant-behind-bars/
Join the Cultureshift!

I choose to remain voiceless
Send this to a friend
Check this out: Pregnant Behind Bars ... here is the link: https://cultureshiftforlife.com/2013/08/29/pregnant-behind-bars/